If you answered yes to either of these questions, there is no easy way to say this, so I’ll just say it:

Twitter and Facebook are two different channels with different audiences and different purposes. Yes, most of your content will work on both platforms, but that content needs to be tweaked to fit the channel in order for it to be fully effective. 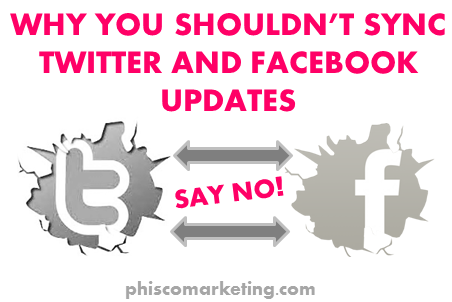 The biggest dilemma is the character count. You have a lot more to work with on Facebook than you do Twitter. So what happens when you go over Twitter’s 140 character count when you have your Facebook updates automatically sent to Twitter?

And oftentimes, the first 120 or so characters of your Facebook post don’t tease people enough to even want to click on the Facebook link to continue reading. You don’t write the same when you don’t have to count characters.

But do you want to know what irks me the most when people sync updates from Facebook to Twitter? It’s when I see either of these tweets:

Who cares? I mean seriously?! I can almost guarantee nobody on Twitter cares that you just uploaded a photo on Facebook. And a tweet with just a link and no explanation is about as tacky and absent-minded as you can get!

This tells me (as a real Twitter fan) that you don’t care to interact with me on Twitter, you only created an account because of peer pressure, to be one of the cool kids. If you’re not going to talk to me on Twitter, why should I follow you here? Chew on that for a minute.

Ugh, no! You’re putting limitations on your content for no reason, and, again, is annoying.

You’re missing a big piece of the problem here: Facebook and Twitter are not equals. They weren’t created to sync together. Each platform have its own culture, functions and layouts.

You don’t have to come up with completely different content for each network. You just need to adjust the update itself based on which one you are using.

Ok, but I don’t have time to create new content for each platform.

So what am I supposed to do?

First, stop saying you don’t have time to meet and connect with your audience. Throwing up your hands with the “I don’t have time so I’ll just copy and paste and sync everything” does nothing to solve the problem.

So here’s an easy fix:

Post the same subject, but modify it just a bit to work better for the social network you’re posting to. If you’re posting it to Twitter, you’re usually abbreviating, eliminating words for brevity, etc.

It doesn’t take that much extra time to create a separate update for each network, especially if you’re using tools such as Hootsuite or SproutSocial to schedule your updates. You’ll show your followers you understand the social networks you are using as well as respect their favored choice.

And isn’t that the point of talking to your followers on social media? So go ahead and un-sync your Facebook and Twitter accounts please.

So have I convinced you to un-synchronize your Twitter and Facebook updates? Or did you already know this, and now you’re sending this blog to your friends that don’t get it?

Join me on May 26th for a complimentary webinar!